Girl Gang Garage in the news: “A car garage run by women for women spreading the importance of diversity and representation”

Girl Gang Garage in the news: “A car garage run by women for women spreading the importance of diversity and representation”

Posted on October 1, 2020 by Erin Morgan in Girl Gang Garage, In the News

It has been a little while, but Girl Gang Garage is gearing back up and was featured on the local ABC 15 news: “A car garage run by women for women spreading the importance of diversity and representation”!

PHOENIX — It’s not your traditional mechanic shop. It’s a car garage operated by women for women, so they can learn the skills to enter the auto industry and empower them to break barriers. 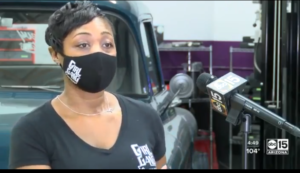 “We have women who have come through who are talented bakers who found that the welding technique for TIG was pretty similar to baking cake. We also had women who were nail technicians who found the bodywork to be one to one with other life experiences that they had,” expressed Shawnda Williams, co-owner of Girl Gang Garage.

Williams was once a ‘newbie’ at Girl Gang Garage but soon became passionate about the garage’s mission that she became a business partner with Bogi Lateiner.

Now both women run Girl Gang Garage, a place that welcomes anyone looking to try something different. 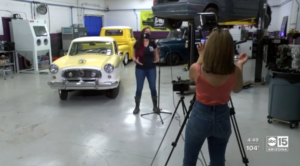 “When we teach these women how to work on these vehicles they’re really learning that this thing that they were afraid of isn’t so scary after all. And if that’s not so scary then what else in their life may not be so scary after all,” stated Bogi Lateiner. (read more and watch the video)

A great big thank you to Lilianna Soto and ABC15 for putting together such a nice piece and taking the time to come out!

We are gearing up to continue working on the all-female custom Volvo build and getting classes started back up.  Whether you are a complete newcomer, a hobbyist or a professional, Girl Gang Garage welcomes you!  Stay tuned for more information!

Follow Girl Gang Garage on social media for information about builds, classes and events and get involved!

Email us at info @ bogisgarage.com